In February, Anne visited our direct trade partners in Costa Rica during harvest. This year’s visit was special for Anne as she spent time at Finca las Torres in the Chirripó region of southern Costa Rica and participated in the harvesting and processing of the same coffee that will be in our Tasting Room this fall.

Finca las Torres is located about four hours south of San Jose off the Inter-American Highway. ICAFE, Costa Rica’s Coffee Institute, has designated this coffee production region as Brunca. This area is more accurately defined however as the Chirripó micro region. Here the coffee is grown at high elevation (around 1500-2000 meters) and has a distinctly different flavor in the cup when compared to the low elevation production in the Brunca region.

Anne worked at the micro-mill during the morning with Régulo and Luis. The coffee which was drying was carefully raked on the raised African beds. Coffee which had been drying on the patio was then collected into Grain-Pro bags to continue the drying process.

The activities in the afternoon centered on the farm. Coffee that is picked during the morning is collected by mid-afternoon. The coffee is measured and each picker’s yield is recorded. By late afternoon the coffee cherries are brought to the micro mill.

During the evening the coffee cherry is de-pulped and laid onto raised African style beds. Café Rivense del Chirripó micro mill specializes in honey processed coffees. The coffee skin is removed during the de-pulping process but the fruit remains on the bean. The idea is to have the honey dehydrate on the bean—the honey must hold onto the coffee bean—which will mean the cup of coffee will have more sweetness.

The balance of the trip was spent at farms in Tarrazu, Central and West Valley. Anne cupped coffees at the farms and arranged for Red Cedar Coffee Co. to bring fantastic coffees to your table. 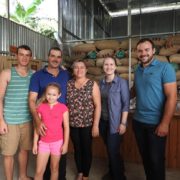 Anne with the Ureña family 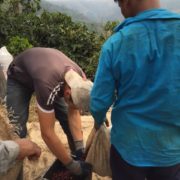 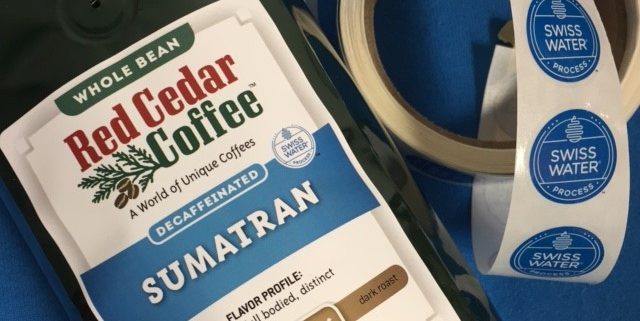 We understand that decaf coffee should be as special as its regular caffeinated counterpart. Therefore, we only trust Swiss Water Process with our decaf coffees. 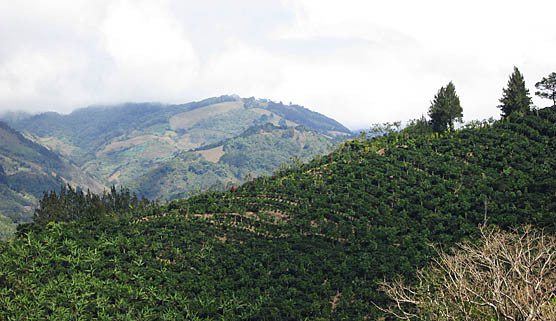 Anne traveled to Costa Rica in February to visit coffee farms and micromills, and to work with our direct trade partners.

February is an important time to visit the coffee farms in Costa Rica. It allows us to gauge harvest, reconnect with our producers, and to cup coffees from this year’s harvest to make our buying decisions.

During this year’s visit, Anne visited producers and mills in five of Costa Rica’s eight growing regions. For the first time, Anne traveled throughout the Brunca region in southern Costa Rica. This region is known for Cerro Chirripo, Costa Rica’s tallest peak at nearly 13,000 feet. This is a relatively new region that is known for producing distinctive, full bodied coffees.

February is the peak of the specialty coffee harvest. This month producers have experienced unusual rainfall which has complicated the harvest in some regions. In the south the rainfall has brought about the flowering of coffee trees earlier than normal. After the coffee tree has flowered coffee cherries will begin to grow. 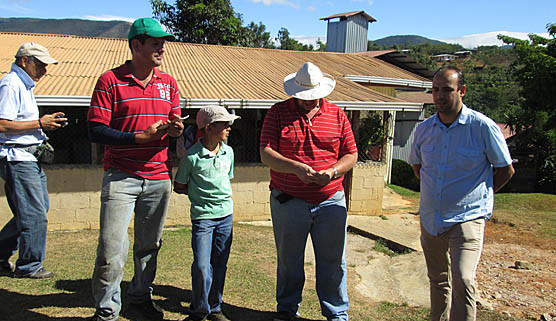 Have you had a chance to try our new Direct Trade coffee, Costa Rica La Lia Finca Dragon? This exceptional coffee comes from the award winning farm of Finca Dragon. This micro lot is exclusive to Red Cedar Coffee Co.

Finca Dragon is located at 1800 meters in Santa Rosa in León Cortés, about a 2 ½ hour drive from San Jose in the Tarrazú region. Luis Alberto Monge is the producer and owner of the farm and micromill. The micromill, named La Lia after Luis’ mother, was built in 2007. By owning a micromill the family can separate the coffee varietals and process the coffee using various methods. Most importantly, the micromill allows Luis to ensure that his coffee is being processed carefully and at the highest attention to detail.

Check out our video to learn more about our Direct Trade relationship with Finca Dragon.